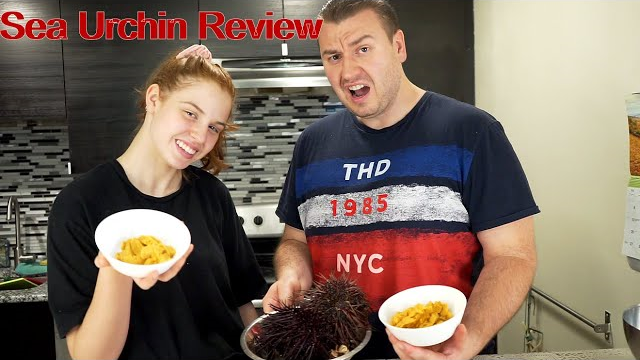 How Does Sea Urchin Affect Your Taste Buds? Sea urchins have a sugary, salty, and sweet flavor due to the abundance of sugar, salt, and amino acids that they contain. Like oysters, they often have a flavor that is reminiscent of the sea because that is where they live and what they eat. (Uni from Hokkaido, Japan, for example, consume kombu, and as a result, have a flavor similar to kombu.)

The flavor of uni is intensely mineral and seaweed-based, and the texture of authentic uni should be creamy. The older ones have a slimy texture that coats the tongue, and the flavor can rapidly become rancid and exceedingly harsh. Watch the video that follows to see BuzzFeed assemble a group of people from the United States who have never had the opportunity to savor the flavor of sea urchin.

A trained sensory panel used descriptive analysis, with a comprehensive sensory vocabulary of 35 descriptors, to analyze sea urchin roe that was obtained from samples collected during the austral autumn, winter, summer, and spring over the course of a two-year period. The samples were taken from different locations around the world.

During the months of autumn (March to May) and winter (June to August), when there were more nutritive cells present in the roe, the sensory differences between the sexes were less pronounced. On the other hand, these differences became more pronounced during the months of spring (September to November) and summer (December to February) as the gametogenic cells matured.

The sulfur odor, bitter taste, and metallic flavor are often linked with the roe obtained from female sea urchins. On the other hand, the roe obtained from male sea urchins is associated with having a pleasant taste. The sensory quality of female roe was most similar to that of male roe in the autumn (it had the least amount of bitterness and the largest amount of sweetness compared to the other seasons), but there was very little variation in the sweetness and bitterness of male roe throughout the four seasons.

It appeared that fall was the best time to harvest E. chloroticus sea urchins in order to collect high-quality roe, despite the fact that the relative size of the roe was at its smallest during this season.

Trying to put into words how sea urchin tastes. Sea urchin has a flavor that is deftly balanced between sweet and briny, and it also has an unmistakable umami undertone. Even though the flavor is distinctive, there is a detectable “taste of the sea,” which is comparable to a mellower form of oysters or caviar.

Do sea urchins have parasites?

Diseases that affect sea urchins can manifest themselves in the wild as well as in captivity. It has been discovered that sea urchins are susceptible to a wide range of illnesses, and these diseases affect a great number of species across the board, including both regular and irregular sea urchins.

It has been hypothesized that the bacteria that are responsible for the global sickness that is generally known as the bald sea urchin disease are not specific but rather opportunistic in nature. The cultivation of sea urchins is attracting more and more attention all around the world.

The consumption of sea urchins is considered a delicacy in many parts of the world. It is possible to consume sea urchin in a variety of preparations, including as a component of a sushi dinner and as a flavorful complement to pasta meals. The Japanese word for sea urchin is uni, however it is more frequently recognized by its common name.

There is no need to wear a uniform when you have uni. Over 700 different species of sea urchins are recognized across the globe.2. It is not as difficult as you may believe it to be. Sea urchins have rows of small tube feet that allow them to walk slowly across hard surfaces; but, in order to survive, they have adapted to attach themselves to rocks.

Mask, snorkel, and flippers are the only other pieces of gear that you will require.3. Search for creatures that have an extra one. A hint to remember when trying to identify sea urchins: The ones that are edible will have something edible attached to the top of them, such as a piece of seaweed, a shell, or a rock.

The finest uni innovation ever Once you have removed a sea urchin from its host rock, you will need somewhere to store it while you continue to search for others. Plastic bags present a challenge for divers because they need them to maintain continual control of the bags while underwater and to take additional precautions to avoid coming into contact with the projecting spines of the animals that have been captured within the bags.

The most helpful piece of advice that we are able to provide for you is to take a huge plastic bucket and affix a substantial length of rope to it. First, secure the other end of the rope to a buoy, and then put a few weights into the bucket. Because of this, the bucket will be able to remain submerged, ensuring that the collected animals are kept as fresh as possible.6.

Be prepared If you try to cut open your freshly caught haul using knives, scissors, or any other device, you will just end up frustrated and maybe injured. Spend a couple of your hard-earned cash on a sea urchin opening gadget so that you can get ready for the next step.7.

Locate both of the gonads. The only portion of the urchin that may be consumed is the gonad. There ought to be a fivefold symmetry of gonads within. Shake the opening sea urchin in the sea water gently (this will release inedible portions like the intestines), then take a spoon and scoop out the remaining orangey insides.

There should be a fivefold symmetry of gonads internal. Their testicles are a delectable treat.8. Hesitant? Add liquor There are many different kinds of alcoholic beverages that go well with uni, but in Japanese restaurants, it is most commonly served with wine or sake.

You don’t even have to eat sea urchins to appreciate their beauty. You don’t like the flavor of the university food? No worries. A sea urchin has a stunning shell behind its spines, but you wouldn’t know it at first look since the spines hide it up. Following the animal’s death and the beginning of the decomposition process, it leaves behind a fragile casing that can be any one of four eye-catching colors: red, green, blue, or purple. 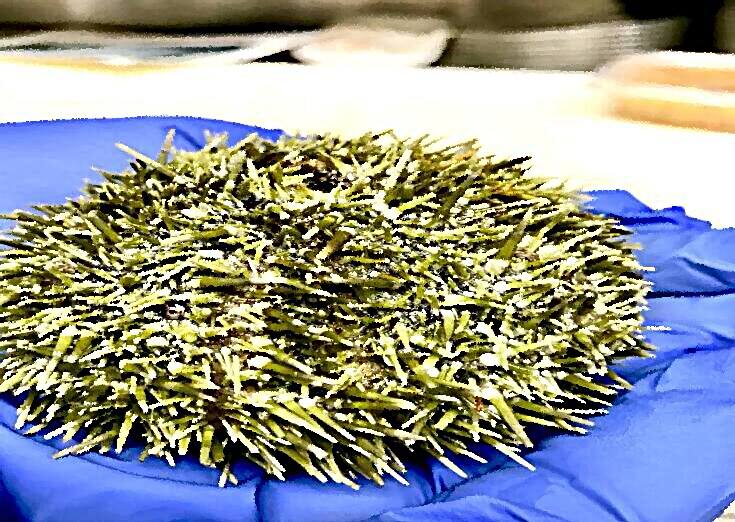 Although the exterior of the shell is covered in sharp spines, the true gem is, of course, what’s inside the shell. But what exactly are you putting in your mouth? It is a prevalent misconception among many people, including sushi fans themselves, that it is the roe, or eggs, of the shellfish. This is especially true in Japan.

In point of fact, that’s not too far off, because those appendages belong to the animal’s gonads (aka sexual reproductive organs, of which each sea urchin has 5 total). Isn’t it delicious? What does uni taste like? This is the second most prevalent inquiry, after “what exactly is university?” Because of its one-of-a-kind flavor profile, the mind-blowing taste of uni isn’t the simplest to describe, but those of us who know and love it are well aware of this fact.

It reminds me a little bit like custard, but it’s much lighter. It is also essential to keep in mind that high-quality uni will never smell fishy but will instead have hints of the sea. People have a tendency to fall on either side of the extreme when it comes to their feelings toward uni, but I’m convinced that at least half of those who claim to “hate” uni and find it gross first tried it at a subpar restaurant that was serving out-of-date, low-quality uni.

And according to the California Sea Urchin Commission, the quality of the product is determined by a few various aspects, including the flavor, color, level of freshness, and overall texture. “California Gold” is the finest quality, and it is usually fresh, brilliant and colorful in color (quite autumnal, if you ask me), and firm in texture, yet it still manages to be melt-in-your-mouth sweet and delicious.

Its name comes from the state of California, where it is grown. This is the best that can be hoped for. The second one is called “Premium California,” and it’s still fantastic, but the color is a little less intense and the consistency is a little bit smoother. And last but not least, there is “Select California,” the penultimate rung before things begin to progress in a more negative direction.

Because they are darker in color, less solid, and more liquid-like in consistency, they are getting closer and closer to having that fishy flavor that you should absolutely steer clear of. Do you want to blow away your guests with your culinary expertise? Visit our UNI RECIPES board on Pinterest to see more recipes. 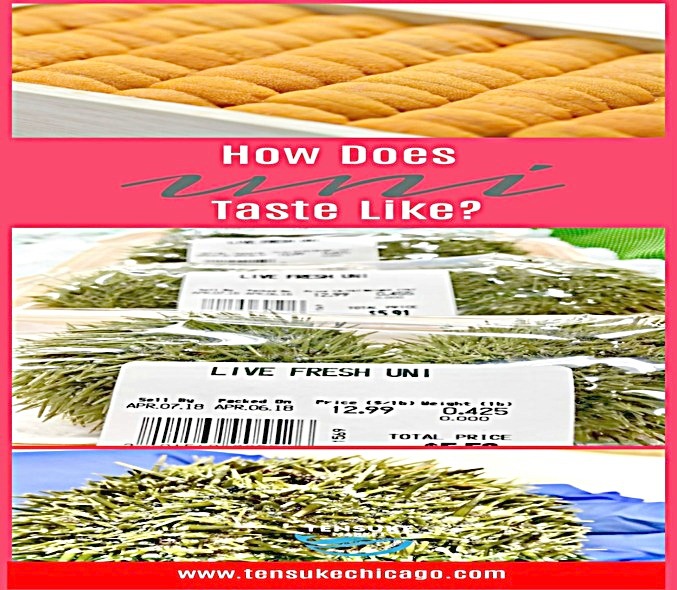 In spite of the fact that eating something as prickly and apparently hazardous as a sea urchin may seem unusual, it is in fact regarded a delicacy in many different regions of the world. Regular consumers of this one-of-a-kind and flavorful seafood may be found not only in Japan and Chile but also in the Mediterranean and on the West Coast of the United States.

But can you describe the flavor in more detail? Those who have sampled one frequently have difficulty articulating how the flavor is best described. Oysters are frequently used as a point of comparison due to their briny, sweet, and subtly salty flavor profiles.