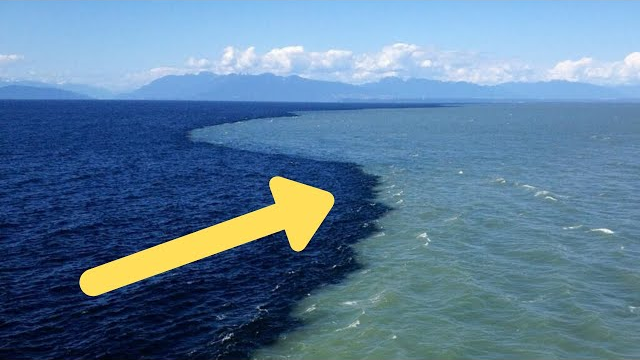 In addition, he stated that, contrary to what was stated in the post, the iron and clay concentration do not influence the mixing of the water. Willis stated that the areas where the waters of the Atlantic and Pacific Oceans converge do not resemble the region seen in the video.

Why do the two oceans not mix?

It is not the merging of two oceans, but rather the meeting of glacier melt water with the seas off the coast of the Gulf of Alaska. It is difficult for the glacier melt water and the off-shore waters of the Gulf of Alaska to mix due to the differences in water density, temperature, and salinity between the two bodies of water, which makes the peculiar phenomena difficult to explain.

Professor Ken Bruland, who teaches ocean sciences at the University of California, Santa Cruz, was a passenger on that voyage. In point of fact, he was the one who took the photograph. He stated that the objective of the voyage was to investigate the process by which massive eddies, which are slow-moving currents, with diameters of up to hundreds of kilometers spiral out from the coast of Alaska and into the Gulf of Alaska.

Because of rivers like Alaska’s 286-mile-long Copper River, which is revered for its salmon and originates from the Copper Glacier far inland, such eddies frequently transport enormous volumes of glacial material with them as they move across the ocean.

To the east of Prince William Sound is where it finally gives up the ghost, taking all of that heavy clay and silt with it. Iron is created as a byproduct of sedimentation. According to Bruland, glacier rivers in the summers are comparable to “buzzsaws” when it comes to eroding away the mountains. “During the procedure, they remove all of this material that can be transported; they refer to it as glacial flour.” Once these glacier rivers reach the bigger body of water, the currents that move from east to west in the ocean take them up and begin to circulate them there.

This is one of the principal means that iron, which may be found in the clay and silt of glacial runoff, gets delivered to areas in the center of the Gulf of Alaska that are iron-deficient.

Do the Atlantic and Pacific Oceans mix?

Are the Atlantic and Pacific Oceans Interconnected in Any Way? However, ocean currents are continually moving across the globe, and the waters of the world’s oceans do mingle. The Atlantic Ocean and the Pacific Ocean meet near Cape Horn, which is located off the coast of South America. The Wikimedia Commons website (CC BY-SA 3.0)

Why is the Atlantic Ocean more salty than the Pacific Ocean?

There are several distinct oceans that encircle the earth, including the Pacific Ocean, the Atlantic Ocean, and the Indian Ocean. In point of fact, there is no demarcation line between these two major bodies of water. However, I will explain to you today the primary factor that keeps the waters of the Atlantic and Pacific oceans separate from one another.

This disparity also plays a role in the strangeness of the phenomenon. At that point, the two oceans merged into one. This is a geographical place that may be found on the very tip of South America’s southernmost point. The Atlantic Ocean has a higher salinity level when compared to the Pacific Ocean.

The different currents in the two bodies of water make it impossible for them to combine into a single body of water. In addition to this, the variation in current between the two seas is responsible for the distinct hues that can be seen in the picture below.

https://youtu. be/NhBQfUVWLFk I appreciate you taking the time to read this essay in its entirety. Please share your thoughts, comment below, and follow this page for more updates. Pattys is the one who authored the content and provided it (via Opera News ) The thoughts and opinions that are stated on Opera News are exclusively those of the author; they do not represent, reflect, or convey the views of Opera News in any way.

Neither does it consent to, nor does it condone, the posting of any content that may malign, among other things, any religion, ethnic group, organization, gender, company, In addition, Opera News does not support or condone the use of our platform for the purpose of supporting or endorsing hate speech, violating human rights, or making statements that are of a defamatory character.

You are kindly requested to immediately notify us using the following email address operanews-external(at)opera.com and/or report the article using the available reporting functionality built into our Platform in the event that the content contained herein infringes upon any of your rights, including those pertaining to copyright, and/or infringes upon any of the aforementioned factors.

In the event that this occurs, the content in question will be removed. See More Oceanic Gulf of Alaska Atlantic The Indian and Pacific Oceans

Can you see the difference between the Atlantic and Pacific Ocean?

When sailing around the tip of South America’s southernmost point, there is no point at which one may observe a clear demarcation line between the Atlantic and the Pacific oceans. The image that most people believe depicts water from the Atlantic and Pacific oceans not mixing together is, in reality, one of water flowing from a river into the ocean.