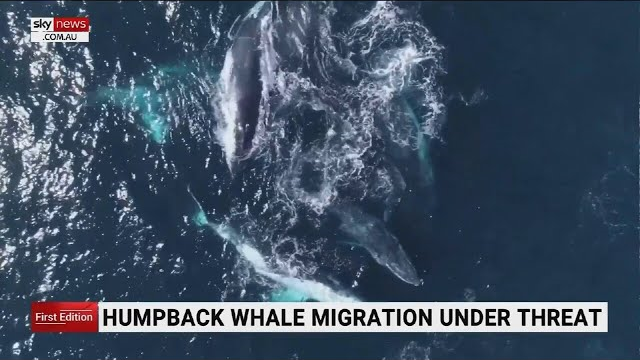 Scientific name: Megaptera novaeangliae Fijian name: Tovuto The humpback whale is a big baleen whale that consumes schooling fish as well as krill as its food source. The largest length documented for a female is 19 meters, but the males only grow to reach 17 meters long.

The maximum weight recorded for this species is 40 tons. The songs that humpback whales make are quite well-known. The songs of male humpback whales are known to be the longest and most complex of any whale species. Their songs are made up of a succession of intricate whistles, squeals, and deep sonorous sounds that are broken up into “verses” and spoken in a certain order.

There is a possibility that each song may go on for as long as thirty minutes. Whales that congregate at the same mating place produce the same song, which changes over the course of generations. The humpback whale is the mammal that migrates the farthest of any species on earth and is known for its extensive travels.

Some of these pods go to Fiji to breed and give birth to their young throughout the months of August through October, and pods of humpback whales may frequently be seen in Fiji during this time. Their migration path passes via the Vatu-i-Ra Seascape, which serves as a corridor.

The commercial whaling industry caused a significant decline in the number of humpback whales, but global preservation efforts have helped some of their populations recover. However, the Oceania subpopulation of humpbacks is listed as Endangered on the IUCN Red List, and it is still classified under the most endangered categories of CITES and the Convention on Migratory Species.

Fiji is strongly committed to conserving cetaceans, as evidenced by its declaration in March 2003 of its Exclusive Economic Zone as a Whale Sanctuary, which provides protection from directed hunts for cetaceans over 1.3 million km2 of ocean territory, and its signing in September 2006 Since 2010, the WCS-Fiji program has collaborated with the WCS Ocean Giants program to do the following: (1) increase the capacity of local scientists and resource managers to conduct research on the Oceania sub-population of humpback whales and implement effective strategies for their conservation; (2) make an initial assessment of the conservation status of all cetacean populations in the Vatu-i-Ra Seascape; and (3) raise awareness among local people about cetaceans in Fijian waters and on efforts to coexist with As a result of our investigation, we were able to identify a previously undiscovered breeding area in the region surrounding Vatu-i-Ra Reef.

When can you see whales in Fiji?

See all The months of June through October are peak migration times for humpback whales. The South Pacific is a great place to go whale watching. They migrate all the way from the Antarctic to spend the winter in more temperate seas. Breeding and giving birth are common activities throughout the wintertime.

This can be witnessed by visitors to the country. A mother whale and her youngster may frequently be seen swimming into the lagoons of Kadavu Island together. Some tour providers provide the opportunity to swim with whales and spinner dolphins as well as snorkel with these marine mammals.

During your whale watching excursion, you could also get a glimpse of some Pilot whales. On contrast to the Humpbacks, these whales spend the entire year in the reefs and lagoons of Fiji.

Are there humpback whales in Fiji?

In Fiji, what kinds of whales may visitors expect to see? – The pilot whale, the minke whale, and the sperm whale are the three varieties of whales that are most frequently spotted in the seas surrounding Fiji. Between the months of June and October, humpback whales are more likely to be spotted.

There have been reports of additional species that have been spotted traveling through the seas of Fiji on occasion. The following types of whales have been spotted in Fiji: Whale species such as the Pilot Whale, Humpback Whale, and Minke Whale False Killer Whales Fin Whales Male Sperm Whales Blue Whales © niuepocketguide. 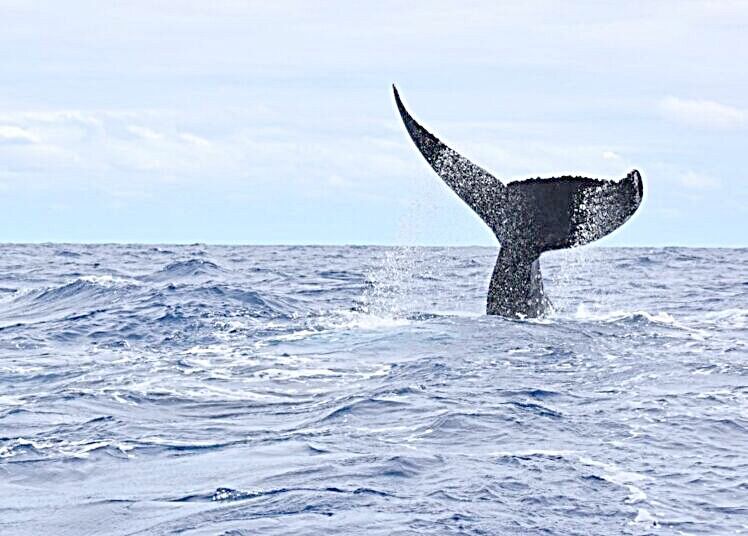 Are there whales near Fiji?

The region of the Pacific Islands is significant for a vast number of cetaceans (whales and dolphins), either as a permanent home, a breeding ground, or a migration corridor. This is because the Pacific Islands region has a large number of islands. More than thirty species of whales and dolphins have been recognized in this region as of this point in time, and only in Fiji alone, we have confirmed sightings of fifteen different whale and dolphin species.

After grazing in Antarctica, humpback whales are known to make their way through our seas on their way to Tonga, where they give birth to their young and breed. There are big pods of pilot whales that live in these seas, and there are also pods of so-called fake killer whales that appear to pass through here on an annual basis singing quite loudly.

The beluga and the sperm whale are the species most likely to be seen by humans, although there is a chance that you could come across a minke whale.L. Molleson/WDC photos | Discover more about cetaceans by reading this. There is a possibility that cetaceans will become stressed when they encounter people, ships, or airplanes. 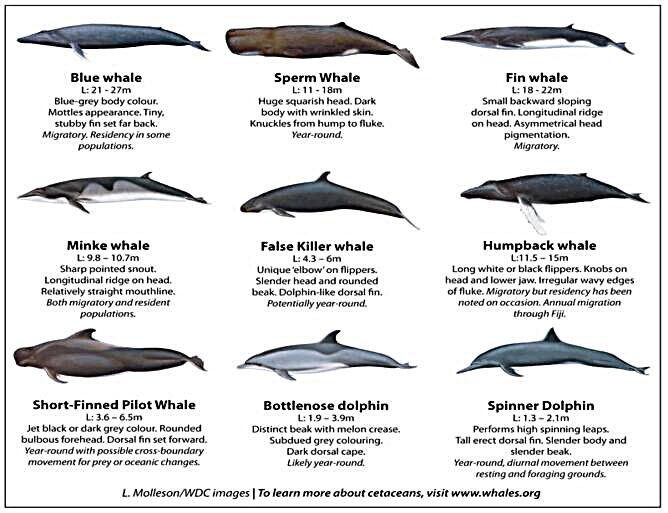 Are there sharks around Fiji?

The reef shark is the most frequent species of shark seen in Fiji, and divers may expect to encounter them on both baited and unbaited dives around the islands. Reef sharks are known as “whitetips.” There are three different kinds of reef sharks that may be spotted here: blacktip, whitetip, and grey reef sharks.

Whitetips, on the other hand, appear to have little interest in divers and the bait boxes they use. Due to the fact that this species is most active during the night, you will most likely come across individuals of it slumbering still in sand channels and caves.

Only the largest individuals of the reef shark type may grow to be longer than two meters, making them one of the smallest of Fiji’s predominant shark species. There is evidence that reef sharks occasionally hunt together in groups, providing a fascinating look at the unusual behavior known as “feeding frenzy.” The Great Astrolabe Reef in Kadavu is one of the best diving sites in the country since it is an excellent location for viewing reef sharks in their natural habitat.

Seasonal encounters: regardless of when you travel to Fiji, you will almost certainly have the opportunity to see reef sharks. Pro tips: If you want to film these sharks’ high-speed swimming, you should use an action camera since they may be both interested and wary, and they frequently dart in and out of view.

Are there whale sharks in Fiji?

Whale sharks in the Fiji Islands (Rhincodon typus) – Sightings in Fiji are mostly coincidental encounters due to the fact that there are no known locations in Fiji where they gather. Because they so seldom break the surface of the water, whale sharks are notoriously difficult to identify from a moving boat.

Is there dolphins in Fiji?

The Best Places in Fiji to See Dolphins – Many people are drawn to the warm seas between Fiji’s 333 islands because of the rich marine life that can be found there. Even while turtles, sharks, and even whales may be spotted all throughout the islands, nothing quite compares to the thrill of seeing dolphins swim alongside your boat and perform their playful antics.

If seeing dolphins is high on your list of things to do during your time in Fiji, then you should check out the following locations. While you’re here, you might also be curious about the Top 10 Wildlife Cruises in Fiji, which can be found here.

How do you swim with whales?

Tahiti is located in French Polynesia. During the months of August through October of each year, humpback whales make their annual migration to the seas off the coast of Tahiti in order to give birth to their young there. In order to preserve the extraordinary marine life that may be found there, French Polynesia is now officially recognized as a shark sanctuary and an exclusive economic zone (EEZ).

In French Polynesia, I also lead women’s adventure programs that include opportunities to swim with whales. Despite the fact that my trip is full, you are welcome to sign up for the waitlist here.

How do you swim with whales?

Tahiti is located in French Polynesia. During the months of August through October of each year, humpback whales make their annual migration to the seas off the coast of Tahiti in order to give birth to their young there. In order to preserve the extraordinary marine life that may be found there, French Polynesia is now officially recognized as a shark sanctuary and an exclusive economic zone (EEZ).

The best places to go whale watching are the islands of Tahiti and Moorea. You have the option of swimming with them every day, or you may plan a day excursion and enjoy swimming with rays, waterfalls, and other things on Tahiti and Mo’orea as well as part of your stay there. The Tahiti Lagoon Paradise operator has received the highest number of positive reviews.

In French Polynesia, I also lead women’s adventure programs that include opportunities to swim with whales. Despite the fact that my trip is full, you are welcome to sign up for the waitlist here.