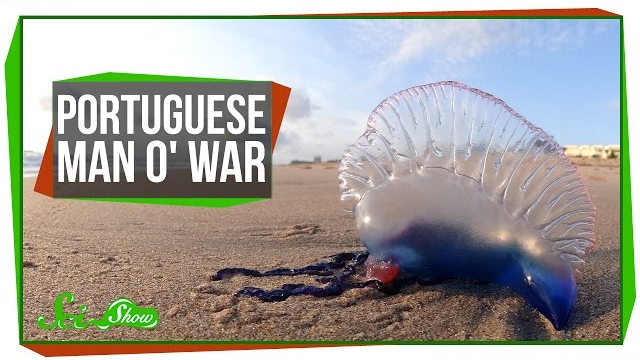 Jellyfish known as Portuguese man-of-war are capable of inflicting great pain on people with their sting, although the stings they administer are only rarely fatal. The majority of people have an instant ache that can continue for up to an hour. In more serious situations, the sting can cause discomfort in the chest and make it difficult to breathe.

The Portuguese man-of-war relies on its venom to hunt and kill fish and other small animals for sustenance. Even the critters that have washed up on the coast are capable of inflicting a painful sting. In spite of the fact that it is sometimes mistaken for a jellyfish, it is actually a siphonophore, which is the term used to refer to an animal that is composed of a colony of organisms that cooperate with one another.

Although its long, thin tendrils have a potential reach of up to 165 feet (50 meters) below the surface, they often only grow to a length of 30 feet (9 meters). The brilliant blue tentacles and colorful, inflated “sails” of Portuguese man-o’-wars, which are seen often in tropical regions, make them simple to recognize.

What happens if you get stung by a Manowar jellyfish?

A jellyfish-like marine critter that may be found in tropical oceans and bays is termed a Portuguese man-of-war, which is also referred to as a bluebottle. Tentacles of man-of-war creatures feature coiled stingers that are equipped with a potent and excruciating toxin.

The tentacles have the potential to reach a length of 165 feet. The sting of the man-of-war fish is designed to immobilize prey fish so that they can be consumed. In people, responses can range from being very mild to being rather severe. In extremely unusual circumstances, it may pose a risk of death.

After inflicting a sting, the tentacles leave behind crimson welts that are lengthy and stringy. The welts might last anywhere from a few minutes to many hours. It hurts locally, there is burning, there is swelling, and there is redness. This rash might last for as long as six weeks, coming and going at random.

Treatment in a hospital is necessary for severe reactions.

What happens if you touch a Manowar? 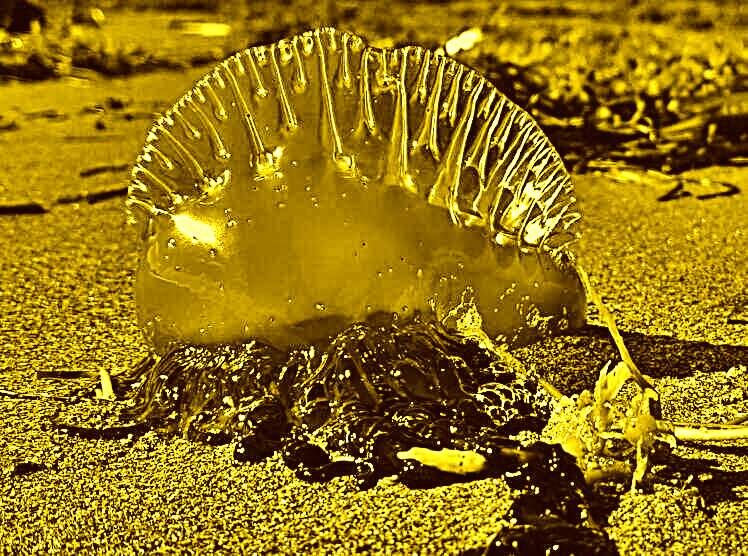 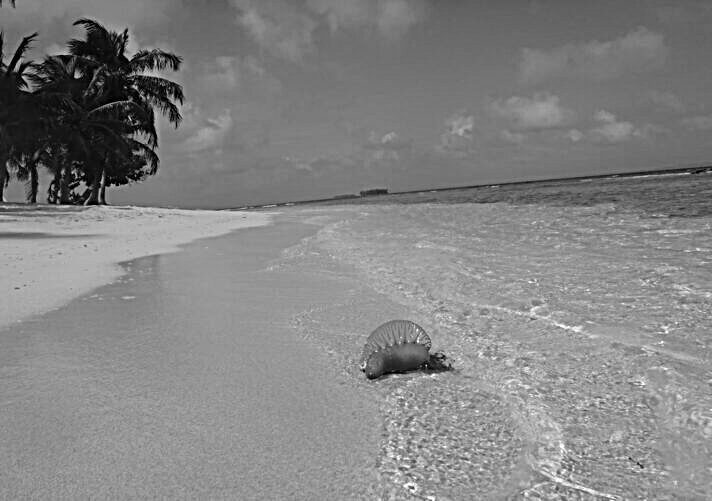 The “bell” and tentacles of Portuguese Man-of-Wars give them the appearance of being similar to jellyfish, but in reality, they are two entirely distinct species. The Man-O’-War is a kind of siphonophore, which is a kind of hydrozoan that is made up of a colony of many different organisms living together.

Jellyfish and man-of-war are both classified as members of the phylum Cnidaria; however, real jellyfish belong to the class Scyphozoa, whilst man-of-war are classified as members of the class Hydrozoa. They are dependent on the work of teams. Zooids are the collective name for the genetically identical individuals that make up each Portuguese Man-of-War.

Tentacles of the Portuguese Man-of-War may extend as far as 165 feet below the surface, which is almost as far as the height of the Leaning Tower of Pisa is. However, not every Man of War has appendages quite as magnificent as those described here. About 10 meters, or 30 feet, is the typical length of a tentacle.

They take their names from famous ships from the past. Because the inflated pneumatophore of the Portuguese Man-O’-War resembles the sail of a Portuguese warship from the 18th century, this peculiar creature was given the name “Portuguese Man-O’-War.” The pneumatophore has the ability to float around one and a half inches above the surface of the water and often has a distinguishing blue or purple coloration.

The sting of a Portuguese Man-of-War is not a pleasant experience at all. Tentacles of Portuguese Man-of-Wars contain nematocysts, also known as stinging cells, which are used to immobilize and ultimately consume their victim. Unfortuitously, they are also capable of stinging people, and this can happen even if the animal has passed away or the tentacles have been detached.

How poisonous is the Manowar?

– The Man o’ War is a species of siphonophore, which is a genus of invertebrates that are closely related to jellyfish. – The Portuguese man-o-war is distinguished by its float, which resembles a balloon and can be a variety of colors including blue, violet, or pink.

A siphonophore is an uncommon organism since it is made up of a colony of genetically identical individuals with specialized roles who are known as zooids. Zooids can take on a variety of morphologies and perform a wide range of tasks, yet they all operate together as one organism.

Beachcombers, take note: the Portuguese man-of-war may still be able to sting you even after it has been washed up on shore for several weeks.

What effects does jellyfish venom have on humans?

Consequences – Some of the possible complications of a sting from a jellyfish include the following:

What happens if you get stung by a Portuguese Man O War?

What Happens If You Get Stung By A Portuguese Man o’ War? Despite the fact that a sting from a Portuguese Man o’ War is not likely to put your life in jeopardy, it is not a pleasant experience. This sea creature’s tentacles are designed to convey poison to fish in order to either kill or immobilize them.

What is the difference between jellyfish and Man O War?

A man-of-war, or Physalia physalis, seen from above and below. This species is also known as the Portuguese man-of-war. The Personification of. The Physaliidae family is home to the jellyfish-like marine creature known as the war. The term “man-of-war” was likely taken from an English armed sailing ship that was used during the 16th century called a man-of-war.

But if you are under the impression that this peculiar gelatinous organism is a jellyfish, you are mistaken. The term “Man O’ War” most likely derives from the likeness of the animal’s gas-filled “sail” to the man-of-war ships used by Portugal in the early 15th century.

A Sailing Colony There are four distinct kinds of polyps that make up a man-of-war, which are, in essence, four separate organisms that are interdependent on one another. The gas-filled bladder that permits the Man-O’-War to float is comprised of a single polyp that specializes in releasing gas, which creates the wind-catching sail for the colony.

The release of millions of stinging nematocysts, which individually send out a skin-piercing injection of venom, is triggered when the tentacles of the colony come into contact with a living organism. Fortunately, despite the fact that the stings of a Portuguese Man-of-War are notorious for being extremely painful, they almost seldom prove fatal.

Lengths That Are Remarkable There is evidence that the venomous tentacles of the Portuguese Man-of-War may reach lengths of up to 100 feet, although the Portuguese Man-of-War is by no means the only siphonophore that is capable of reaching such extremes in size. In point of fact, researchers only recently found a siphonophore in the depths of the ocean that was more than three times longer than a blue whale; this finding suggests that it may be the longest animal that has ever lived.

Even if the Portuguese Man-O’-War itself is not among the candidates for the title of the world’s longest animal, the colony’s enormous tentacles are long enough to serve as a warning to anybody who visits the beach. If you use Twitter or LinkedIn, please follow me there.

Why is it called Man O War?

The term man o’ war originates from the man-of-war, which was a type of sailing warship, and the animal’s similarity to the Portuguese version of the ship (the caravel) when it was fully rigged.

How long does jellyfish venom stay in your body?

Rinse your eyes with vinegar to alleviate the burning sensation in Step 2: (With the exception of the jellyfish found in Chesapeake Bay; see item #6)