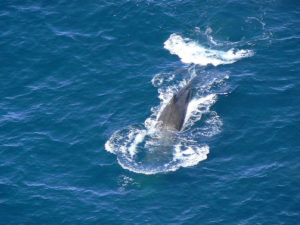 What is The Loudest Animal In The World ?

No, blue whale is not actually the loudest animal on earth. We all read in schools that the blue whales are the loudest, is not it? So, why we are saying in the contrary? Well, the answer needs a bit explanation.

Loudness of sound is measured by a unit called Bell. But the unit is too large for practical purposes and so we use decibel (dB) instead. A normal conversation is about 60-65 dB loud. The sound of a hand drill is about 98 db while the sound of a 12 gauge shotgun blast is 165 dB. Remember, the unit is logarithm based so difference between 30 and 32 dB is not just 2 units but it is 2x.

Measurement of calls of a blue whale has resulted in an impressive sound level of 188 dB. Yes, it is much louder than a shotgun or a jet engine. But a sperm whale can be louder. It has a record of 230 dB. So, it seems from the statistics that the sperm whale is loudest animal on earth. But actually the answer is not so simple.

The complications lie in the fact that our hearing ability is not liner. The intensity of a sound to human ears is largely depended on the frequency of the sound wave. The frequency of a blue whale’s call is about 70 Hz. The voice of a sperm whale is in a much higher pitch. It has a frequency around 10000 Hz. The higher frequency sounds should sound louder in our ears. So, why not the sperm whale is considered as the loudest by most?

Here the problem lies in the duration. The call of a blue whale last about 12 to 33 seconds. It is enough to register as a loud sound in human audible organs. On the other hand, the call of a sperm whale lasts only 0.1 second. It is not easily recognizable as a call of a whale due to such short spell. So, that is why the place of the number one shouter is given to blue whale.

Whales are huge animals. A blue whale can weigh 150 tons. Even the sperm whale is more than 60 tons. So, it is very natural from them to produce so loud sounds. So, it is not fare to compare them with a shrimp, is not it? But despite of its tiny size a pistol shrimp can beat a whale.

Pistol shrimps grow only 1 to 2 inches. But the crustacean is too loud for its size. With its special claw the creature can produce a cavitation bubble. The bubble travels at a speed of 60 mph.

The sound released from the bubble is more than 200 dB. It is so loud that it kills small sea animals by shock wave! But it is not actually a “call” or animal “voice”. It is a sound weapon. The sound is also not audible due to its extremely short time span (a few milliseconds).

he males of the species can produce a sound close 100 dB. It is produced from their penis. Points to be noted that the animal is only 2 mm long!

No living land animal can shriek so loudly (we can’t vouch for the T-rex). But there are many with strong voice like greater bulldog bat like 140 dB. A howler monkey can scream at 128 dB, enough to make you deaf. A parrot like bird name kakapo has a record of 140 dB. The world’s largest terrestrial animal elephant can be as loud as 117 dB. A wolf can score 90 to 115 dB.

Nature is awesome. We have created our blog “All Five Oceans”. It is for those who like the blue oceans and its dark underwater world. If you are a nature lover, if you like the sea animals then you can check the following articles.