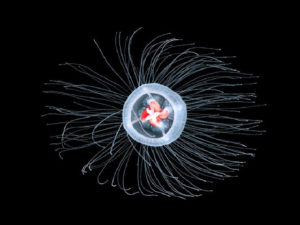 Jellyfish – How Long Is Their Lifespan ?

Jellyfish lifespan can vary according to the species and the environment. Some jellyfishes only live for a few hours while others can survive for much longer times in the wild. There is also a jelly species which is possibly almost immortal.

Jellyfish has multiple phases in its life. It transforms completely from one phase to another. You need to know the life cycle of a jelly to understand fully about its lifespan and “immortality”.

In the beginning, the larva hatched from an egg is known as a planula. It is a free swimming tinny thing which is bilaterally symmetric. It has cilia to swim in the ocean.

The planula later developed into stationary polyp. The polyps generally attach themselves upon a hard rock, marine vegetation, and ocean surface or even upon the scale of a fish. These polyps can be single or colonial.
Later, free swimming ephyra is originated from polyps. A polyp can give birth of many such things. The ephyra later developed into medusa. It is the form which is known to us as jellyfish.

The medusa phase has a shorter lifespan than the planula. A planula can survive for long in the wild or in captivity. But a medusa generally dies after mating with the opposite sexes. 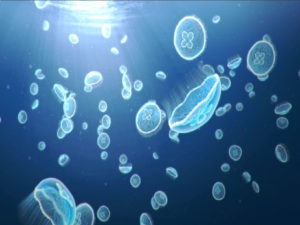 Moon jellyfish is a cool looking jellyfish. It has a semi transparent disc shaped body. It is also very popular among the salt water aquarium hobbyists.

A moon jellyfish can survive for many years in the planula form. If someone keeps one in captivity with proper care, it can live more than 20 years! But the medusa form does not survive long. We can expect a lifespan of 12 to 18 months.

Lifespan of Some Other Well Known Jellyfish Species

The Cannonball Jellyfish or Stomolophus meleagris is an edible jellyfish. It is most common near the southeastern coast of the United States and the Gulf Coast. It survives for 3 to 6 months only in the wild.
Spotted Lagoon jellyfish is popular in the aquarium trade. It has a maximum lifespan of 18 months in captivity. Blue blubber jellyfish is known to survive 12 months. Another famous jelly, “red cross” can live 10 to 13 months in captivity and wild. The good looking “Flame jelly” has a rather short life. It only lives 3 to 6 months.

According to the marine scientists one species of jellyfish might be immortal. The species is known as Turritopsis dohrnii. The jellyfish has the capability of reverting its lifecycle. It can age backwardly. Yes, it can grow back from an adult to a child.

After spending a life as a medusa the jellyfish reverts back to the polyp stage again. From that stage it again develops into medusa stage. That polyp-medusa cycle is probably a permanent one. So, without any outside danger, in ideal conditions the jellyfish becomes effectively immortal.

But is not possible to know that claim of “immortality” is 100% true or not because to prove it we need to study one sample for thousands or millions of years. So, you know we will have to just guess from other evidences.

That is why some marine experts and other biologists have doubted the “immortality’ claim. According to them, the medusa- polyp cycle of T. dohrnii can be broken after a few hundred iterations. But “immortal” or not it can regenerate itself for many times for sure.

Scientists are excited about that fact because it can open a new horizon in medical sciences. If we know the exact process or functioning of aging backward of this jellyfish, it can also be done to human cells. So, that research can make human lifespan much longer.

Jellyfish Lake of Palau – Wonder of the Nature

Can You Eat Jellyfish?

What is the Largest Jellyfish on Earth?