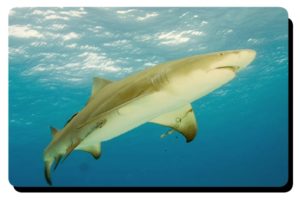 You are not the only one imagining a swimming yellow lemon with teeth and fins after hearing the name lemon shark. Actually, there is not much lemon like quality in that shark except a slight lemon tint on its skin. The color was the reason behind that unusual name.

Scientists are no nonsense folk who call it Negaprion brevirostris. In fact, there are two types of lemon sharks – N. brevirosris and N. acutidens (sickle fin or sharp tooth lemon shark). There was another species (now extinct) N. eurybathrodon.

Lemon sharks are requiem sharks (Carcharhinidae) like the great white or hammerhead. That family of sharks belongs to the order Carcharhiniformes or ground sharks. 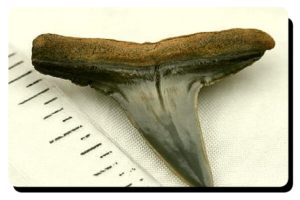 he head of a lemon shark is flattened. There is a short and broad snout. The skin color is slightly yellow. The color helps to camouflage on the sands under the ocean.

There is a special organ inside their head to detect prey. That organ is called ampullae of Lorenzini. It can detect the electric field of any living animal from far.

Lemon sharks live in the shallow warm ocean waters of the tropical and sub-tropical regions. Their main concentration is in the western Atlantic from United States to Uruguay. The east coast has only limited numbers along the coast of Senegal and Cote de Ivory. Some lemons also live in the western Pacific, from Bay of California to Ecuador.

River mouths, mangroves, coral reefs and bays are the favorite habitat of the lemon shark. They does not like the open ocean and so stay within the limits of the continental slopes. The shark generally roams within the depth of 90 m (300 ft). But they can go to the open ocean only during the migration.

Lemon sharks are viviparous. The egg is hatched inside the body. The mother has to carry the baby inside their body until they become more mature. After a gestation period of 9 to 10 months the mom gives live birth of 10 to 30 cubs. 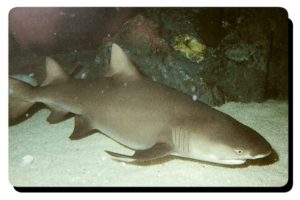 Mangroves are their favorite nursery sites. In the site the babies are born. They live their until they become strong enough to survive in the ocean. The sharks return to the place every year during the season of giving birth.

Lemon sharks become active in the night in search of food. The main food item is different types of bony fishes. The shark is slow and show they prefer slower fishes. Some fishes prefer to hide themselves rather than fleeing at full speed. Lemon sharks love to find these fishes and eat them.

They also eat different types of crustaceans like crabs, shrimps and lobsters. They also eat other sea bed invertebrates like tunicates. The stingrays are also often become victim of these sharks hunger. Juveniles often eat each other for survival.

Generally sharks are single animals. But lemon sharks often make big groups. There are also hierarchy in the group with leaders and followers. They can also haunt in groups with perfect coordination – which is very uncommon among sharks. When one victim is attacked by an individual, the feeding frenzy begins where many joined the party.

In fact, lemon sharks are probably smartest among all sharks. Their body to brain ratio is also higher than other sharks. The shark can learn from experience and interact with others in a group.

Interaction With and Attack on Humans

Lemon shark is edible. In some regions the meat is very popular. So, thousands are killed for meat. The skin of the fish is also valuable. The fin is also used in the soups in East Asian countries. The result is overfishing of the species and steady decline of its numbers. The shark is now in the IUCN threatened list.

Lemon sharks are slow to move and non aggressive in nature. So, it is no danger to humans. Incidents of lemon shark attack on humans are rare. But it is not advisable to disturb it. Some people were bitten in the past for such mistakes. Remember it is a big shark with too powerful jaws which can result in some serious damage.

We have learned many fascinating facts about lemon sharks today. If you have read so far then you were interested to know about the shark. It is possible that you know something that I don’t know. If it is the case then why don’t you share your knowledge with me and other readers of this website?

If you think that more people should read this then help me to reach more eyeballs by sharing this article via facebook, twitter or other social media.