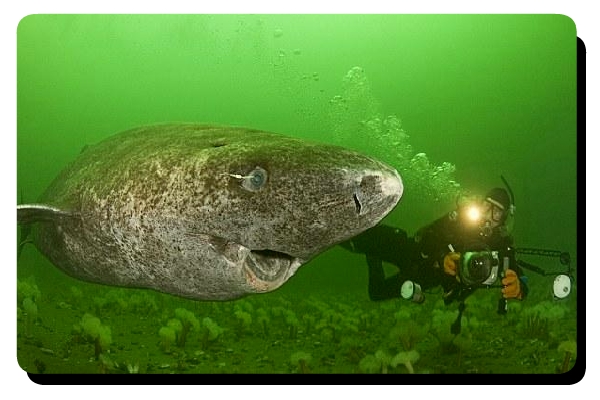 Why Greenland Sharks Are Super Cool ?

Greenland shark is a massive fish that lives in the sub-arctic waters of North Atlantic Ocean. Scientific name of the animal is Somniosus microcephalus. It falls into the group of sleeper sharks or Somniosidae, in the order of Squaliformes. The shark plays an important role in Inuit culture and mythology. They call it “eqalussuaq”. Another common name is “gurry shark”.

The shark is not studied very well because it lives in such areas where research operation is difficult. A special group named GREERG (Greenland Shark and Elasmobranch Education and Research Group) is gathering scientific data about it since 2001.

Greenland sharks come 3rd in size after whale sharks and great white. Actually, it is difficult to say which one is bigger – our candidate or great white. The shark can grow up to 21 ft (6.4 m). The weight of a big individual can be 3100 lb (1400 kg). But most sharks do not get that big. The female is larger as usual.

The eye is often covered with thick layer of parasite copepods. The parasites often eat the top layer of the eye making the shark blind. The skin is thick with a blackish-brown hue. Sometimes there are faint white spots on the back. It is covered with small teeth like dermal denticles. The denticles are sharp and hard like steel. Even contact with the skin of the shark may break your skin.

The shark has a massive liver. In fact, the organ can be more than 660lb (300 kg) in weight! The liver is full with oil. The oil keeps its body warm in cold oceans. It also gives it buoyancy, since the oil is lighter than water.

The teeth of a Greenland shark are serrated. It helps to cut flesh easily form marine mammals like seals and whales. The shark regularly loses teeth which grow back pretty quickly. The bottom jaw has larger teeth than the upper jaw. The upper jaw has 48-52 teeth which are pointed and work as anchors. The lower jaw contains 50-52 teeth used for cutting.

Yes, it is true that Greenland sharks eat polar bears. Not only bears, reindeers, antlers and other land animals can occasionally be ambushed by the shark if they come into water. Sea mammals are in their regular meal. They are especially fond of seals. The shark is not agile enough (they are so slow that their average speed is only 0.7 mph) to chase and catch a seal. So, they ambush them while the seals are sleeping. They eat smaller sharks too. Eels, cod, redfish, wolfish and other cold water fishes are in their regular menu.

Greenland sharks can survive in such low temperatures that will kill most other sharks within a few minutes. They are the only truly subarctic shark. Though the shark often comes to the surface, they prefer to dwell in the dark depth of the sea. It can go 7200ft (2200m) under the ocean.

The shark can be found near the waters around Greenland. The seas that are their common abode are Greenland Sea and Baffin Bay. North Atlantic near Iceland is another region along with North Sea and coastal waters of Norway, and Barents Sea. Sometimes a few individuals come to Gulf of Maine and Bay of Fundy. There was a report of a sighting in the Gulf of Mexico, but some experts say that it was actually a sleeper shark.

Greenland shark is ovoviviparous. The egg never comes out from the female’s body. The babies are hatched inside. The gestation period is long. The babies eat each other inside mother’s womb. Only the strong ones survive to see the light of the day. The average litter size of a birth is 10. The size of the new born is about 90 cm (35 in).

We have learned earlier in that the eyes of a Greenland shark is covered by a thick layer of some parasite creature. That parasite is a copepod. Copepods are small crustaceans. The parasite’s scientific name is Ommatokoita elongate. It can be as big as 5cm (2in). The females of the species attach themselves to the shark’s cornea with an anchor like thing called a bulba. The copepod feeds on the upper tissue of the cornea. It makes the sharks blind or semi-blind.

But the copepods also glow in the dark. It gives the eyes of a Greenland shark a satanic greenish glow in darkness. Many small fishes and other animals become attracted by the glow come near the shark and become its meal.

Greenland sharks are one of the longest living animals on earth. It is estimated that most can easily live up to 200 years. The growth of the creature is too slow. It is observed that the shark grows at a rate 0.5 – 1 cm (0.2 – 0.4 in) per year. The average length during birth is 35 inches. It can grow up to 20 ft i.e. 360 inches. So, to gain 325 inches it would take 800 years according to math! But as it seems impossible biologists have settled in a more believable figure of 200 to 400 years.

Beside humans there is only one known predator of Greenland sharks. It is sperm whale. Those whales are known to attack the shark as a prey. It was first observed in St. Lawrence Estuary. Some experts also believe that orcas may also feed on the shark. These carnivorous whales like it because of the liver oil which helps them to be warm in cold waters. However, the tough skin of their prey damages their teeth badly. There is also the danger of being badly injured by the powerful jaws of their intended prey.

The flesh of the Greenland shark is very toxic. The toxicity is due to the presence of trimethylamine N-oxide (TMNO). TMNO helps the shark to withstand extreme cold. The chemical can produce effects like extreme drunkenness. If you eat it too much you will die soon. It acts as a neurotoxin. Strangle enough, despite of that Inuit people eat the flesh of that shark. They process the meat by buried it into the ground for 8 to 12 weeks. After that it becomes free from any trace of the toxin. The processed Greenland shark meat is known as hakari.

Greenland sharks rarely meet with humans as they mainly live in deep oceans. The cold water is not also ideal for swimming by people. So, there is no verified report of its attack on human has been received till date. Some native Inuit people hunt the shark as a delicate food. But there is no commercial fishing targeting the species.

If you have anything wrong in this article then please let us know. We are always ready to accept it if we are wrong. In that interaction both of us will be benefited.