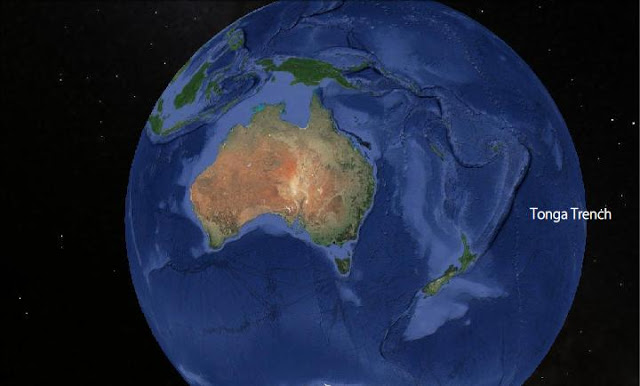 The oceans are full of many abysmally deep places. Tonga Trench is one of them. It is, in fact, the 2nd deepest place on Earth, the first being the Mariana Trench.

The Tonga Trench is situated in the southern part of the Pacific Ocean. The trench lies parallel with the eastern shore of Australia. It is can also be joined with islands of New Zealand with a straight line on a map.

The Tonga Trench is followed by the Karmadec Trench in the south. These two forms the active Tonga- Karmadec subduction zone.

This particular convergent plate boundary is known as the Karmadec-Tonga subduction zone. It is a subduction zone where Pacific plate is going under the Indo-Australian plate. As a result, the Pacific plate bends towards below and the Indo-Australian plate is uplifted. That tectonic event has created the Tonga Trench and some other trenches and ridges.

The deepest point of the trench is known as Horizon Deep. 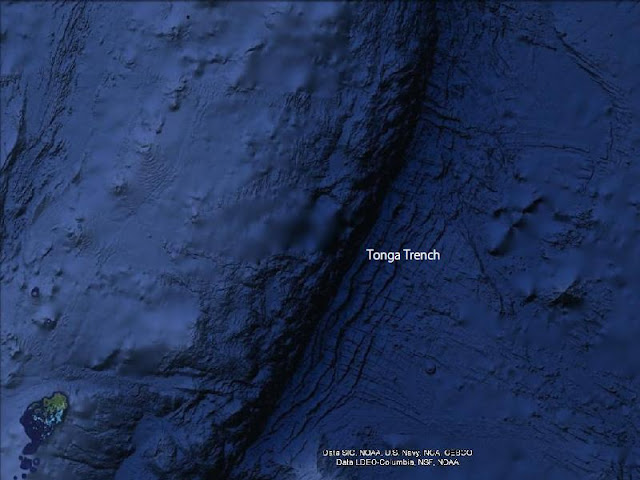 In the Northern Tonga Trench, the convergence between the Indo-Australian and Pacific plate is going on at a fast rate of 9 inch per year. It is too fast for a geological timescale where we have to consider millions of years?

Active tectonic activity around the Tonga trench results in frequent earth quakes around the area. The island of Tonga experience around 350 quakes per year. Often, the large earth quakes generate tsunamis.

The Tonga trench is so deep that the light of sun never reaches to it. As a result, the water inside the deepest parts becomes very cold around 1.1 degree C (34 degrees F).

Due to the abysmal depth of the place the water pressure here is extremely high. Due to the high pressure, no light and lack of oxygen, common sea animals cannot survive here. But there are some special fishes and invertebrates that thrive in this ecological niche.